When you run your own business, there's a surprising level of trust involved.

You trust that the customers who enter your store don't slip a few items into their pocket and walk out. You trust that the person paying you with a credit card didn't steal it from someone. You trust that the agreements you made with vendors and customers will be honored. From time to time, that trust is broken and people do steal from you… but the idea is that you earn enough profit to overcome those breaks.

That's where the credit score comes into play. Businesses are constantly trying to identify a good customer from a bad one. If you have a credit score, which is based on their credit history, you can make a better informed decision than if you were to look at the person visually. Looks can be deceiving and prejudices can be very subtle (or not!).

That's why credit scores are so important.

But what makes a good credit score? For some, it's to be in that top tier so you get the best rates. For others, it's just beating the average. It really depends on where you are.

So, what is the average? Let's find out!

When we say “credit score” in this article, we are referring to the VantageScore credit score. It was created in 2006 by the three credit bureaus as an alternative to the FICO credit score, created by Fair Isaac Corporation. For the purposes of understanding the state of credit scores in America, we felt the two were synonymous and there was more data available for VantageScore. Lenders rely on both for making lending and credit decisions.

The data was provided by Experian's annual State of Credit survey, the latest of which was conducted for the 2017 year and released in early 2018.

How does this compare to the past? Here are the last few years:

The VantageScore rating tiers are:

That means the average credit score in America is Prime – that's excellent!

What's interesting is some of the other data they released along with the average VantageScore.

Like anything else, averages can be deceiving especially when you're looking at the entire nation. With such huge disparities in cost of living, Manhattan vs. rural anywhere USA, the average debt might not even be a useful measure at all!

If you're curious what the average FICO credit score is, the average as published in April 2017 was 700. It was a milestone because it was the first time the score hit that peak.

FICO has been tracking scores for quite some time and here are some historical figures:

Curious to know which generational cohort had the highest credit scores and which had the lowest?

The steady rise in credit scores as you age is not unexpected. Age of accounts is one of the biggest factors in your score so the older you are the older your accounts are likely to be. On time payments and good behavior are also strong indicators.

If you were born in 1998 and just celebrated your 20th birthday, it's impossible for you to have an older account and for you to accumulate much time at all. Your score won't be as high as someone who has 20 years of on-time payments (and don't worry, lenders know this).

A state can be very large, with very different economic and social areas, but it's very hard to parse data below the state level. That said, it's still illustrative to review where the states sit and where you, as a resident, stack up.

Here's something that was fascinating – if you had to guess where the largest concentration of people were in a credit score distribution, would you guess it's near the top? The two biggest groups are those in 750-799 and 800-850: 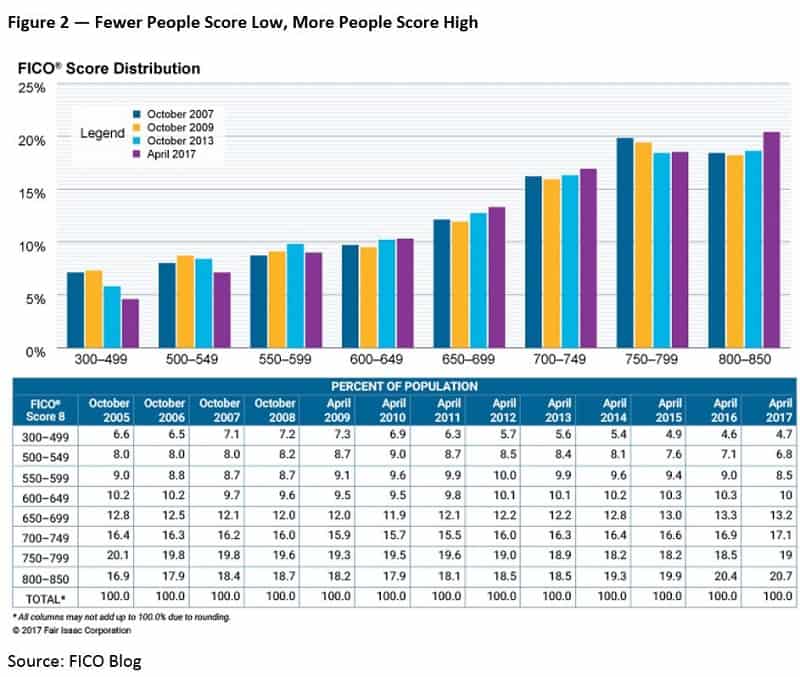 There are a lot of free ways to check your credit score and my favorite way is to use CreditWise from Capital One. It's available to everyone and has the most features. It isn't a FICO score (VantageScore) but for purposes of monitoring your credit, it's good enough.

If you want to improve your credit score, our post explains step by step what you can do to find some low hanging fruit (identify and contest any errors or inaccuracies). You don't need to pay a service (nor should you need to as some can employ some shady tactics).

How do you stack up?

How to Dispute a Credit Card Charge

Banks offer competitive perks and wealth management services for wealthy customers. Private client banking can help you get even more for your money. Unfortunately, not everyone can qualify as a private banking client - a net worth of $1MM or more is usually required. Here are some of the top private banking services available today.

Copilot is financial management and budgeting tool designed to help iOS users to master their financial lives. If you’ve been looking to get better control of your financing across multiple accounts, Copilot may be the right choice for you. It gives you the ability to track your spending, create budgets, and have more control over your financial destiny.