One of the fascinating parts about the stock market is that practically everyone with an opinion about it is, more or less, right.

Is it a good way to build wealth? Yes.

Can it ruin fortunes? Also, yes.

Is it a Ponzi scheme? Kind of, in the sense that part of the reason it keeps going up is that there’s more money flowing into the markets than out of it.

Are there better options? With the same liquidity and risk levels, there aren’t many (if any?) better choices. Unless you pick thinly traded shares, you can usually exit a pedestrian-sized position in seconds. Try that with real estate or any other asset.

Given all that, you’d expect the stock market to be popular and for there to be a lot of participation. But, as you’d also expect, you need discretionary money if you want to invest in the stock market. You have to satisfy the more pressing needs in Maslow’s hierarchy before you can put it in an index fund at Vanguard.

So, who do you think owns stock in America?

This post was updated to use the 2019 Survey of Consumer Finances.

A great source of this information is the Federal Reserve’s Survey of Consumer Finances (SCF). The most recent SCF dataset was released for 2019. We use this data when we looked at how millionaires made their money – it contains a lot of juicy information you can’t find (reliably) anywhere else.

The relevant section for us has to do with the ownership of financial assets. Financial assets include everything from checking and savings accounts to retirement accounts, life insurance, and other managed assets. We drill down into the section that includes ownership of publicly traded securities.

If you’re willing to take polling data into consideration as an accurate measure, Gallup did a poll in March and April of 2020 that found that 55% of Americans reported owning stock. Gallup has been doing this poll for years and the percentage has stayed within a tight range: 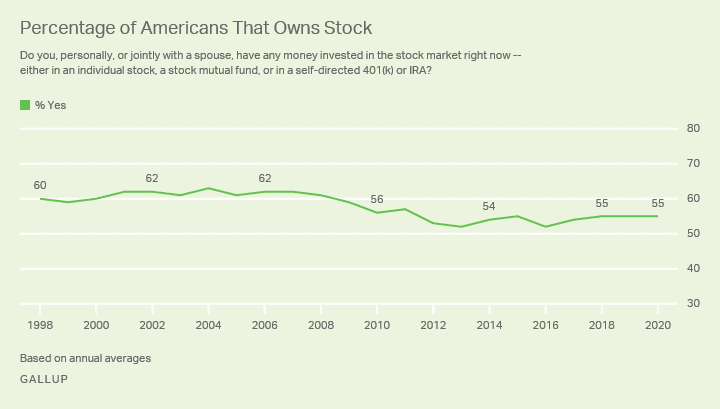 When you look at the entire population of the United States, less than 53% of families own stock. They can own it through a taxable brokerage account or a retirement account, but only 52.6% own any stock whatsoever.

The telling statistics is how this changes based on your percentile of usual income (Table 7 of the SCF spreadsheet):

This shouldn’t be surprising though. When the poverty line for a family of four in the lower 48 is $26,200, that doesn’t leave much room for investing in stocks. You’re too busy paying for housing, food, clothing, etc.

Where Do People Put Their Money?

If so few people own stock, and those that do own stock mostly hold it in retirement accounts, where do people keep their money?

Turns out the answer is not “in their mattress.”

Here’s the breakdown of what assets Americans have:

You have to read that table very carefully. The “Percent holding” columns in the table above shows the number of people who have a particular asset – such as a vehicle, home, CD, etc. This isn’t a measure of how much of their net worth is in a particular asset. In the columns above, in 2019, 99.6% of Americans have a financial asset of any kind.

What can we learn from this data?
For financial assets, almost everyone has a transaction account (checking, savings, etc.) and only half of all people have a retirement account. The next biggest category is 19.4% of Americans having a cash value life insurance policy.

The amounts are quite telling.

First, look at the massive difference between the conditional median and conditional mean! In the “Any financial asset” row, the median value is $25,700 whereas the mean value is $363,700! This shows there’s a significant concentration in wealth. As the old joke goes, whenever Bill Gates walks into the room, the average person in that room is now a millionaire!

Once you get past that, we find a few items that confirm what we’ve known from other data sources. Primary residence and residential property make up a significant portion of one’s net worth. From our look at average net worth, we know that most Americans have the majority of the net worth locked away in their home.

We also see a slip in the nonfinancial asset category where only 64.9% of Americans own a primary residence. That’s down up from 63.7% in 2016 but down from 65.2% in 2013. Fewer people own homes compared to six years ago but the trend is improving.

Another gem? 85.4% own a vehicle, which is the most commonly held non-financial asset.

13.4% of Americans own business equity, which is any privately held business, a slight rise from 13% in 2015. More Americans with businesses as starting a business have become increasingly easier and entrepreneurship gains in popularity.

Building wealth is difficult but it’s made harder given the financial scenario many young people are in. The SCF also discusses other areas of American’s financial lives and one such area is debt and debt burden. Overall debt obligations decreased from 2013 to 2016 with one exception – education debt (yes, student loans). That remains high.

From the SCF document comparing 2016 with 2019: “Student debt continued to be the largest source, in dollar terms, of nonmortgage debt owed by families in the 2019 Survey of Consumer Finances (SCF) (see table 4 in the main text).”

We see this in our low rates of stock ownership, decreasing rates of homeownership, and other social measures like when people choose to get married, start a family, etc. These traditional milestones are being delayed for a variety of reasons but when it comes to the financial ones, it’s hard to invest when you are carrying around an education debt. That’s likely why we see high rates of retirement assets but relatively lower rates for non-retirement investments.

This also means that when we conflate the economy with the stock market, only half of all Americans participate. The stock market might be hitting record levels but for half of Americans, it doesn’t matter. For the other half, many likely have such low levels of market holdings that it won’t have an impact even given the rise.

We see this in the data in several places. If you look at the before-tax family income, distributed by income sources, by percentile of net worth, we see the following breakdown (Table 2):

When the stock market goes up, 75% of the Americans don’t participate in any meaningful way.

It can be easy to misplace important documents, like 401(k) details from a previous employer. Yet, these funds are vital to retirement planning and calculating your net worth. Or, perhaps you’re the surviving spouse or child trying to track down an estate benefit. Here are the steps you can follow to find an old 401(k).

Investment research websites are essential for anyone who wants to trade individual stocks. TipRanks offers a unique set of tools that can help you view professional analyst ratings and gauge investor sentiment. These research features can be a welcome addition to your preferred fundamental and technical indicators. This TipRanks review looks at the free and premium tools available.