James Marshall was born in New Jersey on October 8th, 1810. The eldest of four, Marshall would soon leave New Jersey – heading west like so many young men looking for a better life.

He would settle in Missouri, farming on the Missouri River, until he contracted malaria. That would prompt a move even farther west, to Oregon, where the air was better. His stay in Oregon would be brief, as he moved south to work at Sutter's Fort in California.

John Sutter hired Marshall, who was a carpenter, to help build the sawmill at Sutter's Fort.

On January 24th, 1848, James Marshall discovered gold in the American River and kicked off the California Gold Rush.

I love reading about the Gold Rush because it's a common story that repeats itself. There's a discovery of riches and then people flock to it.

It's oft said that the only people who make money in those situations are the ones selling the pickaxes and the shovels.

But when I see stories of Bitcoin, I'm reminded of the dark side of the Gold Rush. It's just the latest chapter in speculative investments, maybe minus potential death.

You may have read in the news recently about Bitcoin's value reaching $11,000. I periodically get reader emails reminding me that it touched $11,000. And how they told me to get in when it was an eye-popping $3,000!

I'll tell you why I watch from the sidelines in fascination but will never join in.

I Don't Want Another Job 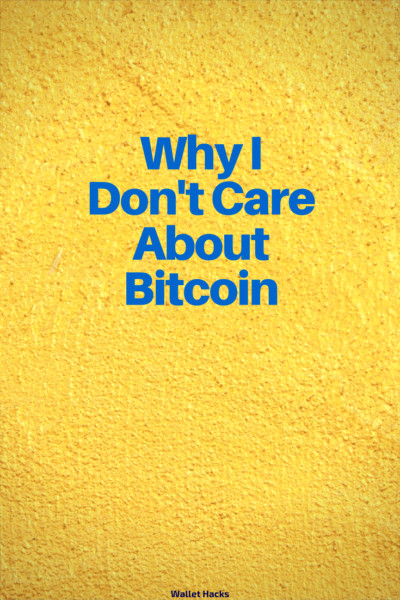 Trading Bitcoin is like day trading stocks. It's another job.

Did you want another job? If you want to make money, you have to do more than read mainstream news articles and open an account on Coinbase. You have to read industry publications, get in the trenches with folks who are intimately involved, and you have to study a lot.

Do you have the time for that? If yes, get after it. If not, do you really want to dabble? Because it's still the Wild West in there.

Do I Have An Edge?

Day trading anything is gambling. You are relying on whatever edge you can develop in your process to win out over time. Day traders and card counters have systems they believe have a positive expected value.

My friend Colin runs Blackjack Apprenticeship, a Blackjack card counting course, and the key to success is understanding the system and lots and lots of practice. He used to be on a card counting team, which is where you get the edge. There's a reason casinos will let you count cards but they will not let you play on a team – casinos aren't there to day trade.

Professionals have a level of sophistication that novices can't imagine. That's who you are up against.

Your money is pretty safe. It's rare that someone breaks into your bank or brokerage account and steals your money (and you have no recourse).

Bitcoin has no owner. Bitcoins get stolen all the time.

In several years, after all these thefts, it will become secure. Right now, theft is far more common than traditional financial institutions.

Gold is meant to be a store of value. If everything goes into the crapper, you could bring that gold, in theory, to another country with a stable government and get fiat currency to spend. This theory works well except you forget we live in the most powerful country in the world.

I can't see a world where the United States Government is gone but there's another stable government that will let me and my gold in. Or will care about gold.

That said – even if that transpires, I can't imagine a world where there's stable electricity and my Bitcoin can be spent. It's hard to run a blockchain if we don't have power.

Bullets are a better store of value than Bitcoin.

“Don't chase the dragon” is a phrase first used by addicts to talk about chasing the high. When I use it, I mean chasing the money. This is not a long-term strategy and so it's not sustainable. That's fine for a little bit of fun – but you will not build long-term wealth this way.

You will continually have to find the next hot commodity and hope you get it right more than you get it wrong.

Slow and steady wins the race. Bitcoin is sexy, it's hot, and if you made a few bucks in it – fantastic!

But I want slow and steady. I want to contribute to my funds at Vanguard on a regular basis, rebalance every six months or so, and then move on. The stock market isn't infallible but it's also been around for many many years and it's very mature.

What Is Worth Studying About Bitcoin

Bitcoin is great! I'm so glad it's here for several reasons.

Study the fervor around Bitcoin because this happens all the time. Mainstream media craves news and the hottest financial news is Bitcoin and other blockchain technologies. This happened with the dot com boom, housing market, and so many other bubbles. Is Bitcoin a bubble? No idea, I don't care, but the news is covering it like it is.

Companies having their own initial coin offering (ICO) is fascinating. This is when a company offers their own cryptocurrency (coins), leveraging similar technologies, to raise money.

Blockchain and smart contracts is a great technological innovation. The best way to learn about it is this Tim Ferriss podcast with Nick Szabo. It's meaty but if you really want to understand it, it's explained quite well in that podcast interview.

What do you think about Bitcoin?

VXUS vs. VEU: Which is the Better International ETF for Your Portfolio?

Long-term investors understand the importance of diversification, including the need to spread capital beyond US markets. Two popular international stock funds include Vanguard Total International Stock ETF (VXUS) and Vanguard FTSE All-World ex-US ETF (VEU). The question is, which is the better international ETF for your portfolio - VXUS vs. VEU?

How to Buy Hulu Stock

Hulu is one of the most popular streaming services on the market. The growing interest in Hulu might make buying its stock seem like a winning proposition, but for one not-so-small complication, there’s no way to buy it outright. That said, there are a couple of ways to leverage the Hulu surge.