My friend Stefanie O'Connell recently got married. People get married all the time.

The reason I'm telling you about Stefanie is that she did something very few people do – she returned her engagement ring. (but, obviously, accepted the proposal)

Why? Well, her post goes into great detail on why but it comes down to one key idea – it's not important to her. She's “not much of a jewelry kind of gal” and “the idea of walking around with three months worth of my fiancé’s salary on my hand just gave me anxiety.”

But marriage is between two people, not for society to decide. (and if people are committed to one another but don't want to get married, society has no say in that either!)

But what if you want a symbol of your commitment but don't want to spend months of salary on a symbol? Or perhaps you have bad feelings (or a bad association) with diamonds?

Here are some great alternatives to the traditional, and expensive, diamond engagement ring:

Obviously, the most affordable alternative to a diamond engagement ring is to have no ring at all. The cost of this is $0!

Here is something I've noticed… after a few years, a lot of women don't wear their engagement ring anymore. I'm not saying all women do this but it's something that's more prevalent than I expected.

The reasons run the gamut. Some are afraid of losing it, some don't like that the ring gets snagged on things (like if they have to wear gloves), and I've even heard of some rare cases that they've become allergic (or at least their skin becomes irritated) to the ring, especially after their first pregnancy.

No rings, it was a “tradition” made up in western culture by the jewelry industry. In older cultures the ring on a woman signifies “owned” by her man. Only Indian culture had male wedding rings, that is a new introduction to western culture. Once you know this, rings aren’t cool

Nothing says commitment like a tattoo. It's the fraction of the cost of a ring, will last forever, and there's no way you'll ever lose it. 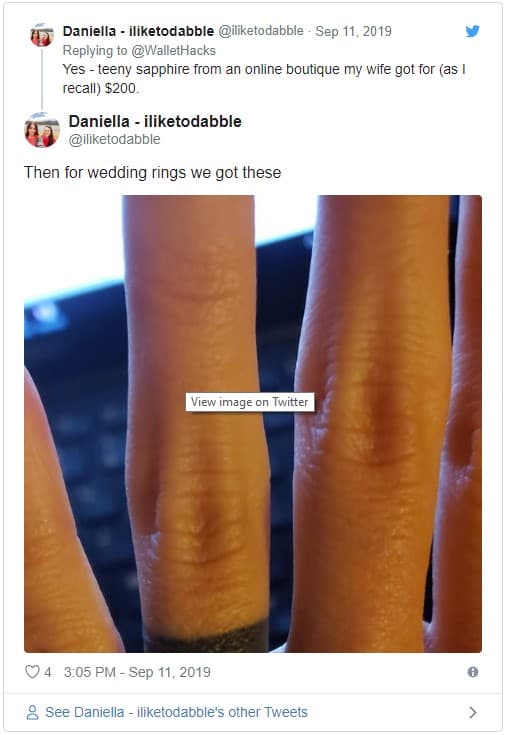 When you picture a diamond engagement ring, you probably picture an enormous diamond and maybe some diamonds next to it.

But it doesn't have to be that way!

But you can get diamonds in a ring and skip the massive diamond. Amanda, from My Life, I Guess, went with small diamonds:

Yup! It’s a sterling silver with teeny tiny diamonds. We got it at the mall for like $80 and I love it and wear it every day 🥰

She explained: “I was new to the world of personal finance, and was doing everything I could to cut expenses and save money. The last thing I wanted to do was to take on even more debt, especially for a piece of jewelry. So I went to the website of a chain jewelry store in town, sorted their engagement rings “priced low to high”, and found exactly what I wanted – a sterling silver ring with diamond accents for $69.99 + tax. That was over 5 years ago, and I still wear it every day!”

Cubic zirconia is “zirconium dioxide” (the cubic crystalline form of ZrO2) and it's manufactured to be flawless and colorless. You can make it any color you want but to make it look at like a diamond, they make it colorless. It's also extremely cheap – you can get a 1 ct CZ for less than five bucks.

What's funny about CZ is that the chief complaint is that it's too perfect. It's too bright.

It looks fake because it looks too good. 🙂

Cubic zirconia. A diamond made in a lab. 1/10 the price. Shinier and most cant tell the difference.

Moissanite is a stone that was discovered by Henri Moissan. He actually found microscopic particles of moissanite in a meteor crater. It is naturally occurring but also extremely rare in nature – but the lab-created version isn't rare, difficult to create, or expensive. It's more brilliant than a diamond and slightly yellower and grayer than a diamond.

It's more expensive than cubic zirconia though but doesn't have that bright “fake” look that can be a complaint about CZ. 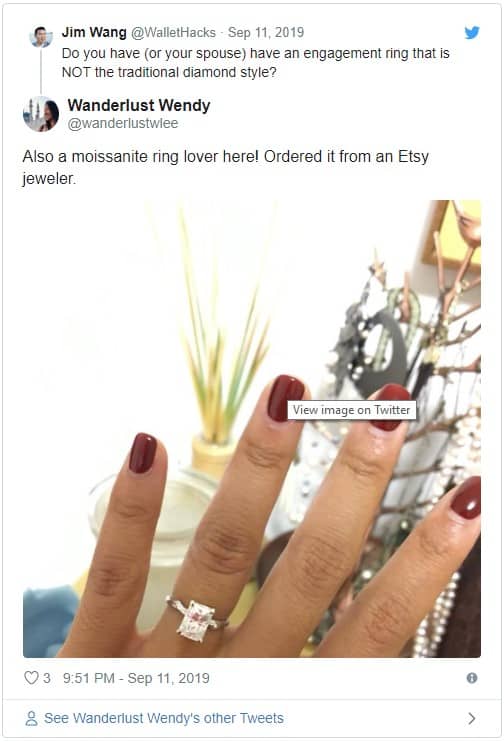 A 1 ct moissanite gem will run you around four hundred dollars.

Diamonds created in a lab are slightly cheaper, around $1,500 for 1 ct, but you completely avoid the risk of buying a conflict diamond. It's not cheap but it's not nearly as expensive as a naturally occurring diamond. So you get the look but keep some of the savings.

CZ, Moissanite, and Lab Created Diamonds are the only alternatives that try to recreate the look of a traditional diamond engagement ring without the cost.

What if you don't like the look of a diamond?

Well, here are a few ideas that don't try to play toward “tradition:”

Birthstones are fun because they're relatively inexpensive, pop with color, and do capture some of the emotional connection. Gemstones vary in cost from one another because of supply and demand, but they are all going to be, on a carat to carat comparison, cheaper than a diamond.

(if you or your love was born in April, sorry, but that gemstone is diamond!)

What's fun is that some gemstones come in multiple colors. For example, on James Allen, you can find sapphires that are blue, pink, green, or yellow. They also have green emeralds and red rubies.

I looked at the prices for a 1 carat stone and here's what I found (remember, there are quite a few factors so I just took a random 1 ct stone to give you an idea of relative cost):

Here are the birthstones by month:

Some gemstones are associated with certain meanings or confer some protection or power, as passed down through lore and culture. If you or your loved one associate these feelings with certain stones, this could be a good alternative to the diamond.

When I asked Jackie Beck, she explained why she wanted a blue sapphire:

My husband wanted a band without stones for him, and I didn't want a diamond because I'd had that with my ex. Of course, we just wanted the other to have whatever they wanted.

I chose a blue sapphire because they're beautiful. Also, I have a black star sapphire ring that used to be my mom's that I wear on my other hand. I now have a sapphire for each hand, I guess you could say I went with a theme.

Amber is fossilized tree resin, so technically a gemstone but it's resin and it's the reason they made dinosaurs in Jurrasic Park, and it's been used in jewelry since Neolithic times. Neolithic times!

Check out this awesome ring worn by Piggy of Bitches Get Riches: 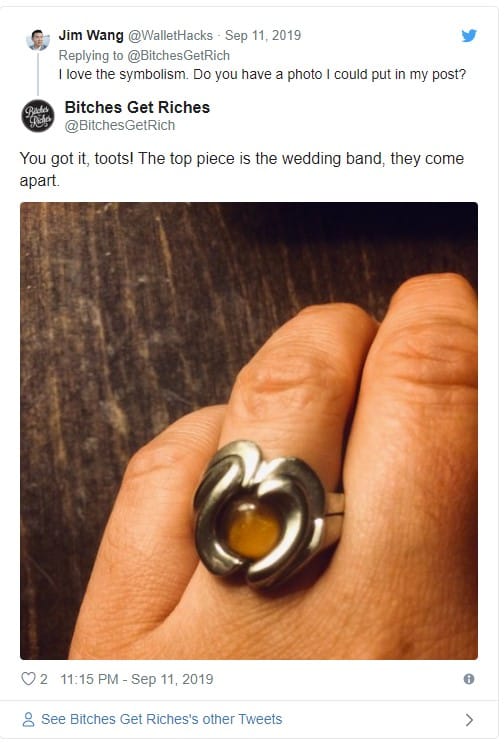 Why amber? She explains: “I wear a lot of amber jewelry. I like the symbolism of it: things get stuck in time, preserved for millennia in drops of petrified tree sap. That's the kind of permanence I want for both the moment we decided to spend our lives together and the way we feel about each other.”

It could be your mother or your grandmother's engagement ring, perhaps it was passed down from her mother or someone much older in your family line. The connection will mean far more than one made by a jeweler.

MEEEEEE!!! My husband found it on the clearance rack. It's got a bunch of small black diamonds and white sapphires, and he made sure that the gems were created in a factory and not mined so that I wouldn't potentially be wearing a blood diamond.

I asked her privately about it and she explained:

So I'm pretty picky. I gave him a $250 limit for a ring, and it had to come from Zales because they were the only national jeweler that makes sure their diamonds are sourced ethically. He went to a few in the area shopping from their clearance section and found the ring from there (I can send you a picture when I'm not at work, haha).

If you look for synthetic diamonds / gems, it's generally going to be cheaper than ones found in the ground, and they're less likely to be bought in skeezy ways.

In the end, it's about the emotions associated with the ring and sometimes you can get that through something other than a diamond. When I asked people on Twitter, I had a lot of people tell me they didn't get or receive a traditional diamond engagement ring. It may seem common in your circles (or not!), but it's certainly rare to get a non-diamond ring.

If you want to see the responses, check out this thread.

Me! It's white topaz with mystic fire topaz on each side. I'm thinking of "upgrading" it to a single square cut mystic fire topaz, which is actually cheaper and also what I had wanted at that time but couldn't find. pic.twitter.com/PD9wn3E6pQ

Yeah my wife has an amethyst ring. She picked it out, she loves it, it cost barely anything. If I would have spent months of my salary and surprised her with an expensive ring that she didn't have any say in choosing she would have divorced me before we even got married.

I sure do! Art Deco vintage style. pic.twitter.com/TTNTd1RTJc

Status games are expensive and you may not even consciously realize you're playing them. Here's how to stop and reclaim your life.

Marcus vs. American Express Savings: Which Is Better?

What are Toyota IncomeDriver Notes?

Did you know that you can buy notes from car financing companies? Toyota, GM, Mercedes, and more will take your money and offer you yield comparable to online savings accounts - but are they worth it? We break it down.