I read about Yotta Savings, which is a bit of a goofy name for a bank, on a thread on Hacker News. The name was a bit of a turn-off honestly, it’s hard to take a bank seriously when it sounds like my kids saying the name, but the idea behind it is sound.

The founders were inspired by Premium Bonds, which was a UK savings program that was started back in 1956. When you save money into your account, you get entered into a lottery where you can win prizes. The more you save, the more tickets you get into this monthly raffle. With interest rates so low, savings accounts are not appealing.

The idea is that by using human psychology to tease people with a much bigger win (the lottery), you get them to do something good (save money).

Right now, Yotta Savings offers 0.20% APY – which hasn’t kept pace with the best online savings accounts after recent rate increases – but that’s without considering the reward aspect. It is still much higher than brick and mortar banks though!

Ally Bank, which is an online bank, is offering 3.30% APY which looks bigger but these are all still relatively low numbers. (these are all more than what a brick and mortar bank would offer as interest)

So, is this worth it?

On August 12th, 2022, Yotta announced that it would be changing their interest rate calculations and this review does NOT reflect those changes (yet). We are working on an update to capture all the changes. The quick summary is that the new interest rates will be worse because they removed the prize for matching 3, 4, and 5 numbers. They also reduced the prize for matching with the Yotta ball in favor of adding a bigger lottery win – called a Hot Pot. We have also removed our rating score until we do a full review update.

Who is Yotta Savings?

Yotta Savings is a financial services company that offers an FDIC-insured interest-bearing account with a twist. Every week, there is a lottery for a prize that is $0.10 to $10 million. For every $25 you have saved, you get a recurring ticket into this lottery. If you put in $100 on day one and never add another dollar, you get 4 tickets for each drawing. Add another $25, then you’re up to 5 tickets.

How Does the Lottery Work?

For each of the tickets, you have to pick the numbers similar to a regular lottery. If you don’t select the numbers, your tickets will be auto picked.

Every night, starting with Monday, a number is drawn at 9 PM Eastern. On Sunday, the 7th number is drawn and the winners are determined. The numbers are selected by a third party “A” rated insurance carrier and they are not affiliated with Yotta (outside of doing this and being the insurer). The Sunday number is the “Yotta Ball,” similar to a Powerball, and you get way more when you match that number.

The key thing to understand here is that it’s important to get into this early. Like a real lottery, some prizes are split. Any of the prizes over $999 are split among the winners. So if two people match the numbers for a $5,000 prize… you each get $2,500.

How can they afford to give away a $10 million prize? They can’t… which is why they have an insurance partner that would pay out the jackpot if someone wins it. It’s a lottery so you can win lower dollar prizes. Also, much like a lottery, you don’t get $10 million. The prize is expressed as a present value of an annuity – so it’s “worth $10 million” and you get $5.8 million.

You can also get a ticket by mailing in a handwritten request (so it’ll cost you a Forever stamp). Send a “handwritten sheet of paper with your name, address, e-mail, and phone number to: 45 East 22nd St. #26B New York, NY 10010. For each completed sheet of paper, you will receive one (1) Ticket. If you want to select your own numbers you should include those numbers on the sheet of paper. If you do not provide numbers, they will be randomly provided. Limit of one request per envelope. The entry will award a Ticket for the drawing that starts on the next Monday, after the mail in was received (not postmarked).” This is for a single ticket, not a recurring one, and seems like not a great use of a postage stamp. 🙂

This is what I “won” recently: 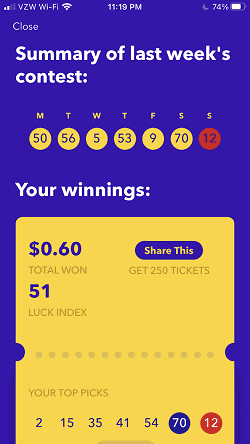 I joined Yotta mid-week so I didn’t get much, I had tickets but they were auto-picked and they have a rule where none of the auto picked numbers would be numbers that had already been drawn.

If you do sign up, make sure you go into your settings and go to Privacy & Security to hide your name. Every winner (First name, Last initial, plus City/State) is shown on the app unless you set it to hide yourself:

“Yotta Winner” is someone who has chosen to hide their name.

Your Effective Interest Rate Is Higher

The 0.20% APY rate is a baseline – you also get a shot at the prizes too. Since we know the odds of winning each of the prizes, you can calculate your “expected value.”

If you’re a fan of pocket, you’ve probably heard of the term expected value. It’s a calculation where you take the various probabilities and multiply them by the prize, then add them up to calculate the amount you would “expect.”

If you have an unbalanced coin that will hit heads 55% of the time, your expected value changes. For every hundred flips, you would win 55 times and lose only 45 times. This is a difference of $1000 – which means your expected value per flip is $10.

One quirk about Yotta is that when you withdraw, you’re going to lose tickets in the weekly drawing. How do they decide which tickets you lose? You lose the most valuable ones.

Yep, you lose your highest winning tickets up to that point in the week so you are effectively pushed to make withdrawals on a Monday when none of your tickets have hit any of their numbers.

Just something to keep in mind. 🙂

I would say so. They’ve partnered with an FDIC insured bank and the account doesn’t have any minimums or monthly fees, so there doesn’t appear to be any “gotchas” in the account. Your money is FDIC insured so you have backing from the federal government.

Is Yotta Savings Worth It?

I think it’s a fun twist on an old idea and I think it has merit especially in our low-interest-rate environment. Interest rates are going to be low for a while and so this may inspire more people to save.

The appeal of a prize-linked savings account is that you can enter into a weekly lottery drawing without having to “pay” for a ticket. You save money (a good thing) and that money earns a little bit of interest (also a good thing) but you sacrifice some opportunity cost (it could earn a little more elsewhere) for a shot at a bigger prize.

If you know folks who love playing the lottery, show them this app. They get a free drawing into a lottery for doing something financially beneficial – saving. Win-win.

I just opened an account to see what the hype was all about and the process took just a few minutes. I’ll let you know if I win anything! 🙂

Status games are expensive and you may not even consciously realize you're playing them. Here's how to stop and reclaim your life.

Marcus vs. American Express Savings: Which Is Better?

What are Toyota IncomeDriver Notes?

Did you know that you can buy notes from car financing companies? Toyota, GM, Mercedes, and more will take your money and offer you yield comparable to online savings accounts - but are they worth it? We break it down.