Many years ago, I bought an airline voucher from someone online. I paid them 50% of the value of the voucher but then discovered that I couldn't use the voucher on the flight I planned. There were some restrictions on the voucher and the seller decided that he wasn't going to refund me my money. In fact, he decided to stop responding to calls and emails. I was out about a hundred bucks and I learned a valuable lesson. 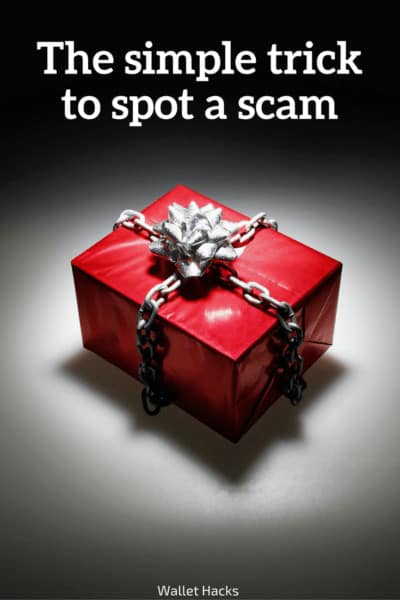 In my case, the seller wasn't planning to scam me. The voucher was legitimate, albeit with restrictions I suspect neither one of us were too clear on. The voucher was delivered to me. If it worked, everything would be dandy. The seller was simply an opportunistic scammer and to be 100% honest, I didn't see it coming.

Years later, with more experience under my belt, I knew that buying a voucher from a stranger on the internet is risky at best.

So today, I'm going to give you my best tip for figuring out whether something is a scam. It's so simple that you'll shake your head in disbelief.

Ask the opinion of five people who you believe are smarter and/or more cynical than you. Then believe them.

If you're too embarrassed to ask, it's probably a scam.

If you're afraid someone will steal it from you, it's probably a scam.

Your ability to spot a scam might not be well developed but you probably know someone whose scam meter is on point. You certainly know five people whose average scam meter is spot on.

Ever heard of the Nigeria 419 scam? It's when some prince in Nigeria tells you that they have amassed a wealth that is locked up somewhere. He just needs a few thousand bucks to unlock it and you're the person to do it. It's known as an advance fee scam or the Spanish prisoner scam. No matter the name it's acquired over the years, it's still a scam. Tell five friends, one of them will have heard about it and warn you against sending this dude your money.

Joining a market research company or some other business opportunity and they want you to pay? They ask for an application fee before you join because they need to process paperwork and other gobblygook – it's a scam. It's a common survey scam but you may not have heard of it before – fortunately one of your friends might tell you that they've never applied for a job and had to pay an application fee.

Selling something on Craigslist? You're selling something for $200 and the guy says he can pay but will pay you with a wire transfer of $500, he just needs $300 back. You should know that's a scam, why in the world would someone pay you $500 and ask for $300 cash and the item? If you aren't sure, ask five friends. Someone will bring you to your senses!

The IRS won't call you about an audit. And they won't accept payment in iTunes gift cards. (but if you need to talk to someone, here's how to reach a live person at the IRS)

This applies to a lot of things in life.

Not sure? Ask five friends you trust. One of them will set you straight!

It's time to do some financial spring cleaning and get your finances in order. Our guide covers 10 important money moves you should make right now, from simplifying your money to shredding old documents.

The 10 Best Flexible Jobs for College Students in 2022

Given the many constraints on your time, finding a suitable job when you’re at college can be a challenge. Want some help with the task? Today, we’re going through 10 of the best jobs for college students.

California has continued to issue stimulus checks each year to help residents combat the rising costs of gas and other goods. We explain how their recent stimulus checks work and when you could expect yours.

If you pay rent and aren't earning points, you should consider the Bilt Mastercard. It's a solid rewards credit card that gives you rewards points for paying your rent (without an extra fee) and can potentially build credit too.