I love how beautiful the banknotes of other nations are.

I love the rich history you can learn by seeing who, or what, a country puts on its paper money.

And I’m always a little saddened when I see the design of our banknotes. We take the term “greenback” a little too seriously. They’re all the same size. Until Harriet Tubman appears on the $20 bill, there are no women. There hadn’t been a woman on any of the United States’ currency since 1978 when Susan B. Anthony was on the dollar coin.

They’re so boring, designers have reimagined them and the new bills look so much sexier.

Here are the obverse side of our bills, reimagined by Travis Purrington, and shared in an article on The Verge back in 2014.

If you were to go back in time… to the days of yore… our money was a little bit cooler, especially when you consider the technology available back then. What you didn’t have in terms of printing and dyes you made up with denominations. 🙂

A Brief History of US Currency

Before FRNs, there were United States Notes (1862-1971), or Legal Tender Notes, and were the longest issued type of paper money. The United States Notes were authorized as fiat currency, which meant they didn’t have the backing of any physical commodity. They are still valid currency but haven’t been issued since 1971.

Demand Notes (August 1861 – April 1862) preceded United States Notes and had green backs, hence the term “greenbacks.” If you know your history, you’ll note this was during the Civil War – the US Government printed Demand Notes to help pay for expenses. This was also the first time that the US Government began printing money for widespread circulation.

In each case below, I just chose one that I thought looked the best. 🙂

We had to start with the Big Boy.

The largest denomination bill ever produced by the United States was the $100,000 bill, featuring Woodrow Wilson. The last time it was printed was back in 1945 and in 1969, all banknotes above $500 were discontinued.

There were several $10,000 notes, the one pictured above is a Federal Reserve Note; there are a series of Gold Certificates too and the back of the bills vary. They all feature Salmon P. Chase, who served as the 25th Secretary of the Treasury, and other prominent roles, under Abraham Lincoln.

That man is none other than James Madison, the 4th President of the United States. Madison was Thomas Jefferson’s Secretary of State and supervised the Louisiana Purchase from France. He’s also considered the “Father of the Constitution” for being crucial in the drafting the Constitution and championing the Bill of Rights.

This is a gold certificate from 1882. Note the color of the back, you can see why they started nicknaming the later notes as greenbacks.

This is another gold certificate but it’s from 1928, which is after the issuance of demand notes and their green back.

Check out this earlier gold certificate with Abraham Lincoln.

$500 bills were plentiful with a lot of different styles since $500 is far easier to spend than $100,000, wouldn’t you say? You had silver certificates, Federal Reserve Notes, etc. It and the $1,000 notes had the most variation and we won’t show all of them here. You can see the whole list of every large denomination bill on Wikipedia.

This is hands down, my favorite bill. First, it’s $10,000 issued in 1878. The BLS’ CPI calculator only goes back to 1913 and $10k in 1913 is about a quarter-million today. Imagine walking around with a quarter-million-dollar bill in your pocket!

Next, just look at this bad boy: 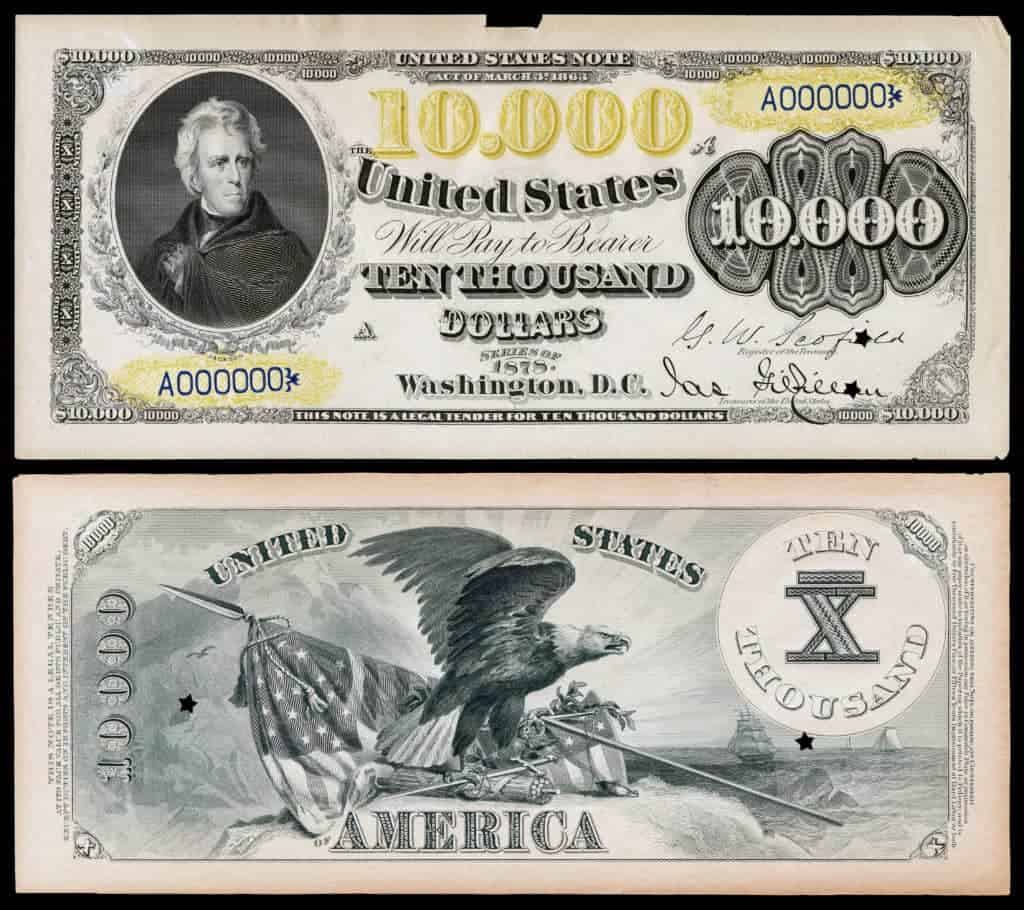 Want some more fun? Here are the world’s most exclusive credit cards. Credit cards trimmed in gold, yup, they exist.

Bingo is a quick and entertaining game that doesn’t require as much strategy as other casino games like Solitaire. If you’re wondering which apps you should play for a chance to win cash, I’ve compiled a list of 10 bingo apps you can try today.

Bingo is a quick and easy game to play, and it makes for a fun hobby. You can play it online to occupy your free time or enjoy some friendly competition. It can also be worth playing to improve your skills for cash tournaments if that’s your cup of tea.

Solitaire is a fast-paced card game that’s easy to learn and play by yourself. It can also be an exciting way to win cash prizes if you’re looking to upgrade your grandma’s favorite computer Solitaire game. This Solitaire Cash review covers how this app can help you make money from your phone by playing this timeless card game.

Billiards video games are fun to play for enjoyment or competition. If you’re looking for free practice rounds and legit cash tournaments, consider Pool Payday. This game offers head-on competitions to win real prizes from your phone. Here is a closer look at Pool Payday - a fun hobby you can potentially earn money from.