When I was a kid, I tried talking to my parents about money. I was told that I needed to focus on school and let the parents focus on the money.

I grew up in a moderately strict Chinese American family. We had rules but they weren't ridiculous. A focus on academics but not at the expense of everything else.

One strict thing was that as kids we didn't talk about money. It wasn't something we needed to worry about. (and I turned out fine!)

Many of our social taboos about money exist for social comfort at the cost of knowledge and education. Kids shouldn't have to worry about money but they should understand it. I wouldn't have a 5-year-old balance a checkbook or figure out how to pay for food, but a teenager should have some basic money skills.

I'd also argue that some social taboos about money specifically designed to keep you ignorant. Some exist to enrich others.

When I go to conferences with other entrepreneurs, we freely talk about how we earn money, roughly how much it is, what's working and what's not. We do this because we realize that shared knowledge will help each of us grow our business. The pie is enormous. We can all take a slice. Heck, we can take two or three and still have leftovers.

When you think about it, what our business earns is what we earn. When Pat Flynn shares that he earned nearly $1.7 million over the last 12 months, that's transparency on a scale that you'd never seen in a corporate office. Sure you can deduct expenses and taxes, but that's still money that pays his bills and feeds his kids.

When Bjork and Lindsay share their income report, you can deconstruct their business down to the ad unit. You know exactly what gets deposited into their bank account each month.

They share this information because the conventions are different.

In the corporate world, employers try to pay you as little as they deem necessary to keep you happy. If they pay you more than necessary, they've failed in their fiduciary responsibility. Remember, whoever decides your salary is not paying for it out of their pocket… but they do have a responsibility to the company to avoid overpaying you. It's not personal, it's business.

This means that the person next to you, doing the same job, probably makes a different salary for the same job. If you two were to talk, one of you would be unhappy and demand a raise. That would be bad for your boss.

That's why talking about salary is frowned upon. (heck, President Obama even signed an executive order protecting employees of federal contractors so they could discuss pay — see the Office of Federal Contract Compliance Programs Pay Transparency Fact Sheet)

FWIW, rarely does someone next to you do exactly the same job you do. Even two people at separate registers may earn different amounts for reasons outside of day to day work. One may be more senior, may have more unseen responsibilities, etc. For the purposes of this argument, I think that simplification is fair.

Taboo 2: How Much You're Paying

What's another money subject people don't talk about? How much people pay for things — especially fees for services.

We recently had a 310′ long section of our driveway paved. On several occasions, I got the “if you don't mind my asking, how much was it?” question ($6500). I don't know why I would mind being asked other than it's a taboo to ask how much people pay for things.

Talk to someone who is over the age of 50 and chances are they have a “financial guy.” It's usually a friend of a friend, a guy they know through someone else, or someone who has worked with a family member before.

If that person is investing money with their financial guy, they are almost certainly overpaying. Vanguard mutual funds charge you a fraction of a percent in fees — Vanguard Total Stock Market ETF has a 0.05% expense ratio — that's $5 on every $10,000. Wealthfront will manage $15,000 for free, then it's 0.25%; these are on top of the, on average, 0.12% fees charged by the underlying ETFs they put you in.

But they've feasted for decades because no one talked about it. Vanguard got flak early on because they were too cheap. Then word of mouth spread about how index funds were fine, how actively managed funds sucked, and now look at where we are. Billions upon billions of dollars are in index funds. That's millions upon millions of advisory fees not being earned.

There are laws that prevent companies from doing this in the reverse. If companies got together and agreed not to compete, they could be investigated for price-fixing! That's how important communication is.

Debt is debt. It's how much you owe. But it's also so much more…

People in debt are bad right? Except for mortgages. And car loans, because you need a car to get to work. And student loans… because, well, education is good. And debt related to medical expense. Because debt is better than dead.

Listen — we all have debt. For some, it's high-interest credit card debt. For others, it's a lower interest rate mortgage or a student loan. But it's still debt.

Bottom line: You owe someone else money.

When talking about debt is taboo, it keeps people more in debt. Alcoholics Anonymous works because of the support system.

If you're able to share your debts with your friends and family, who are your support system, they can help. At best, they can keep you accountable and check-in on you. At worst, you get to take this thing that you feel embarrassed about (if you didn't feel that way, it wouldn't be taboo to you!) and put it out in the open. You take its power away and now you can fight it.

Heck, if nothing else, they'll stop asking you to do expensive things so your debts don't get worse.

The only people who don't want you to talk about it are the folks collecting interest on your debt. They prefer it if you keep paying.

What To Do About It

Here's the beautiful thing — it's becoming less and less taboo to talk about this stuff. That's great.

It starts with using and contributing to places that collect this type of information – where you can discuss subjects like salaries and benefits openly – but ultimately it comes down to individuals openly discussing it with their friends.

The first time I talked about money with someone it was a fellow blogger. It felt strange at first but over time, as we mutually benefited from sharing strategies and tactics, the benefits were becoming clearer and more tangible. We would both benefit significantly from our respective blogs and part of success could be attributed to our conversations.

Start with your financial peer group, as it'll lessen the social and emotional awkwardness, but start communicating these important topics. Knowledge is power.

Oh, I Get Why They Exist…

I'm not a fool, I know that many of these taboos exist because they can lead to uncomfortable conversations and feelings.

Salary can be a deeply emotional subject because it's not unreasonable to tie our self-worth to the work we do. Salary is the only quantifiable aspect of our jobs – it's hard to measure happiness, fulfillment, growth, and other aspects of why people work. Learning that someone earns more than you can sting, especially if much of your self-image is tied to your salary.

It can engender feelings of resentment, envy, and other negative emotions that outweigh the value of sharing knowledge. While I recognize it's a little crab mentality (in any other situation, why would I feel a certain way about you if someone else paid you more!?), it is the world we live in. That's why it's important to tread lightly (but not avoid it entirely!).

Have you become more open about your finances? How have you benefited? 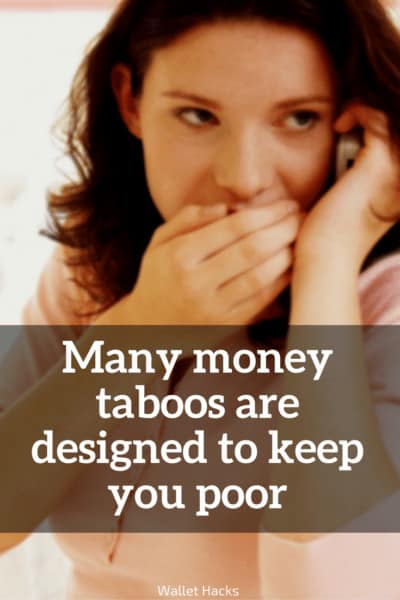 There are many personal finance apps with tools designed to help you recover your footing and build a stronger financial future. One such app is Brigit. In this Brigit Review, I’ll cover their various products and services, share some pros and cons, and let you know who Brigit is best suited for.

What Is Total Annual Income and Why Is It Important?

Fingerhut is a catalog and online retailer that offers buy now pay later arrangements to its customers. The benefit comes in the form of affordable payments and the opportunity to build or repair your credit. But Fingerhut isn't the only player in the game. Here are 8 Fingerhut alternatives for you to consider.

How to Convert Visa Gift Cards to Cash

Gift cards are great, especially when you get them for free. But sometimes, you just need cold, hard cash to pay the rent, send a friend some money, or catch up on some bills. In this article, I’ll show you how to convert your Visa gift card to cash.