When you're the son of first-generation immigrants, your childhood home is an enclave.

We had hanging scrolls, framed texts, and photos of our relatives in Taiwan. My friends had movie posters of the Goonies, Back to the Future, and ET.

As a kid, I was embarrassed when my friends came over.

Why were there so many paintings of goldfish on the wall?

But that was my culture and it wasn't until many years later that I would finally understand what it all meant.

Decades later, my lovely wife and I went with my parents to visit our ancestral home in Wenzhou, China.

When we landed at the airport and deplaned, you would've thought we were rock stars or foreign dignitaries with how many of our family greeted us. I didn't understand, at the time, how momentous an occasion this was for the family.

In the period after the civil war in China, my grandfather visited Taiwan on a tourist visa and never went back.

HE NEVER WENT BACK TO COMMUNIST CHINA.

(they frown on that type of thing)

This decision would forever change the trajectory of his life and, as a result, his entire line. There were serious repercussions back home in Wenzhou, a weight he would carry with him for the rest of his life. His sister, who tested extremely well, was not allowed to go to college. And it would be decades before he'd ever see anyone in his family.

In 1978, my father emigrated to the United States from Taiwan on an education visa. He bought a one-way ticket, that's all he could afford. He left my mom, her extended family, his extended family, his first language, and their entire social support structure behind. While there were no government-sponsored repercussions, there was the small matter of 7,800 miles between them.

It was a difficult move but one that forever changed the trajectory of his life and, as a result, mine.

My mom would join him a year later, once he'd saved enough money to purchase a ticket, and they were so happy to be together again that I was born a year later. 🙂

My grandfather and my father made those moves, at great peril to our family, because it represented a better life. Not a better life for themselves, necessarily, but certainly one that was better for their children. The sacrifice they made, to give up comfort and relative safety, was a calculated bet that the grass would truly be greener on the other side, as long as they were willing to do the work to seed it.

Moving from China to Taiwan was a Level Up.

Moving from Taiwan to the United States was a Level Up.

These days, you can change your life's trajectory without having to take such big risks to health or big sacrifices to your near-term happiness.

What Is a Level Up? 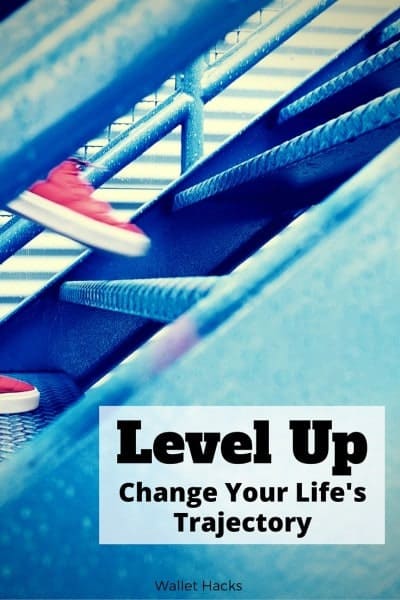 If you enjoy your life, do what you've been doing and enjoy it. Take a few percentage points in a raise each year, go home and enjoy whatever activities you love, and live your life. Be happy. Not everything is about getting more, it's about being happy.

To get more, you need to change your trajectory. You need to identify and take advantage of opportunities that will shift your trajectory so you take a new path. These shifts are Level Ups.

The difference between graduating high school and graduating college is astronomical. The Federal Reserve Board of San Francisco released a report (dated May 2014) that showed how over a lifetime, the average college graduate earns over $800,000 more than the average high school graduate.

While not discussed in the study, if the college graduate invests some of that difference, the $800,000 becomes much much larger.

College is one of the oldest Level Ups in the book.

Like all other Level Ups, it's not a guarantee. It merely gives you a higher probability of success.

There are a lot of online education options and not all of them are expensive.

What if I told you that you could get a certification from Harvard Business School for less than a thousand dollars?

If you want more than 30 hours, you can take advantage of their Credential of Readiness (CORe) program – a series of three courses (Business Analytics, Economics for Managers, and Financial Accounting) – that will prepare you to “contribute to business discussions and decision making.” It's a 17-week program that costs around $2,000.

Level Up: Whiten Your Collar

If you look at the concepts themselves, you see a similar delineation in a variety of areas. In retail, you have the folks who work in the stores and those who manage them. Even in office work, you have folks who “do the work” and those who “manage” it. In the military, you have a similar line between the enlisted and the officers.

The military's pay scale is public information. The Army's basic pay for a Private (E1) with less than 2 years of experience is $18,378. A Second Lieutenant (O1) with <2 years experience gets $34,862.40, a difference of $16,484.40 a year. A Staff Sergeant (E6) with six years of experience earns a basic pay of $35,578.80. Officer basic pay is significantly higher. To Level Up, if you work in a blue-collar role, you need to find out what you need to do to move into a white collar role. This is often done through education or the accumulation and demonstration of skills. If you've ever wondered why white collar work is more valuable, it's all about impact. As a blue collar worker, you are often doing manual work producing a single widget. As a widget maker, how many can you make in a day? A dozen? If you are really good, maybe you can do 15? 20? When you manage a factory, you have a hand in managing hundreds of workers making widgets. Your decisions impact their production capabilities and your improvements could have a magnified impact. Make one change and everyone goes from twelve widgets a day to thirteen. Your factory goes from 1,200 widgets to 1,300 - a difference of a hundred widgets. The bigger your impact, the bigger your value to the enterprise, and the more you'll be paid.

Level Up: Start a Business

The first two examples focused on something you would do for yourself and your primary occupation. With College, you improve your education and your future job prospects because you have a degree in a high-demand field. With Whitening Your Collar, you add skills and put yourself in position for a greater role in your organization so you can have a bigger impact and, as a result, earn more.

This example explains how in your spare time you could find a hobby or interest you can transition into a side business. When I talked about transitioning from blue to white collars, the core idea was about impact. How many people can you impact? When you think about starting a side business, think about what you can do to increase your impact on the world. The internet and social media have given each of us an outsized reach and ability to impact the lives of others – that's why starting a blog is such a popular way to start a business.

The opposite of this is having an outsized impact on a small number of people. I have a friend who sells medical equipment to hospitals and earns a healthy six figure income by selling just one of these units a year. It's an expensive device so each of these sales takes quite a bit of time but he gets compensated well for it because they're so dang expensive. If you have an outsized impact and can capture just a little bit of that for yourself and your family, you can find prosperity.

Not all Level Ups have to do with money and your career. Money is important but it's not all-important. Your health, your relationships, your sense of fulfillment and self-actualization – those are all crucial as well. Those all have an impact on your life's trajectory.

My uncle was business partners with a very wealthy man in China. The partner had grown his wealth through real estate speculation and was worth several hundred million dollars, if not into the billions. He was wildly successful in business but his relationship with his wife and daughter was terrible. His health was terrible despite being a relatively young man (he took a dozen pills a day and was in his 50's).

He had changed the trajectory of life through business.

But, unfortunately, while his net worth was higher than most, his lifespan was shorter. He wouldn't get to enjoy the fruits of his labor.

Remember what it's really all about… because it's not the money.

The Region-Beta Paradox: “It’s Not That Bad” Is That Bad

The Region Beta Paradox is a powerful idea that explains why you'll endure something much longer than you should. See how it applies to your life and how to escape it.