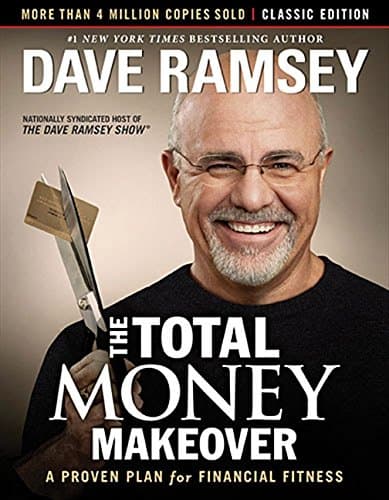 The Dave Ramsey Total Money Makeover plan for cleaning up your finances is controversial, to say the least.

Some people love him and swear by his advice. After reading his books and listening to him on the radio, many have changed their lives. It's quite amazing.

But others disagree with his approach. Some think he's just a savvy salesman. Some point to his anti-debt stance and how it would be impossible to live that way. They point to his multi-million dollar house and say he's putting up a facade.

Which one is he?

In this world, you're responsible for you, your family, and your financial situation. If the advice Ramsey provides works for you, that's all that matters. There are thousands of people who are out of debt because of Dave Ramsey. You can't argue with those results.

What Is The Total Money Makeover?

If I were to boil down the book into a single sentence, then I'd say that Dave Ramsey's Total Money Makeover is a book that gives you a good framework to get yourself out of debt and back on a solid financial footing.

It starts with a pretty simple philosophy: Debt is bad and cash is king. While many personal finance experts approve of – and sometimes encourage – what they call “good” debts (i.e. mortgages and student loans), Ramsey is different.

His belief is that anytime you owe money to someone, they own you to some extent. And he’s got a point. Even smaller mortgages or student loans put an obligation on the borrower. It means you’ve got a certain amount of money you have to come up with each month – to give to someone else.

While we all need some money to live on, expenses in the form of debts add an extra burden, says Ramsey. He believes that paying cash is the way to go, and he means that literally.

Part of his philosophy involves using what he calls the Cash Envelope System for managing your fluid spending budget. So, you’d set a certain amount of cash aside each month to cover fluid expenses such as groceries, gas, entertainment costs, etc.

When you want to make a purchase in any of these areas, you’d take the money out of your nicely labeled envelope and buy with cash. When the cash in one envelope is gone for the month, you’re done spending in that area.

What About Credit Card Cash Back Bonuses?

One might argue with Ramsey that credit card cash back bonuses make a valid reason for paying your expenses with credit instead of cash. Ramsey disagrees.

He cites studies that show that people spend more when using credit cards than they do when they pay with actual cash because you don’t see the cash leaving your wallet. He also believes that people often buy stuff for the sole purpose of getting the cash back bonus.

Lastly, and this is a good point, he says that most people are undisciplined with spending. Because of that, they run the risk of buying more than they can pay off in cash each month when using a credit card.

Again, he’s got some valid points. You can’t spend yourself into debt when you’re paying with cash.

At the core of Dave Ramsey's advice is his “Baby Steps” towards financial freedom:

If you listen to him on the radio, he'll refer to these Baby Steps often. It's a good framework for thinking about money management – and it is the framework used in his budgeting app called EveryDollar.

You can argue the order of the steps or the numbers involved, but if everyone did these steps then we'd all be in a better financial situation.

Of all the steps in the “Baby Steps,” the one that gets the most attention is the debt snowball.

The debt snowball strategy has you list all of your debts and their monthly payments. If you have extra cash to put towards debt, put it towards your smallest balance first. When that debt has been repaid, take the amount you would've sent them and add it to the payment you make to the next smallest debt.

As you pay off your debts, your monthly payments to the other debts increase like a snowball.

Many personal finance experts speak against the debt snowball. Why? Because when you’re looking at debt payoff from a strictly numbers standpoint, it makes more sense to pay off debts in order of highest interest rate to lowest interest rate.

Yet Ramsey still insists that his way, paying off from smallest balance to largest balance, works best. Why does he believe that?

Why The Debt Snowball Strategy Works

Mathematically, yes, it's better to put your extra cash into the highest interest rate debt. This lowers the total amount of interest you’ll pay as you pay off your debt. But by paying off the smaller debts first, you pay them off faster and celebrate wins more frequently. These celebrations motivate you to continue your payments and get out of debt.

Since human psychology gets people into debt, why not use it to get out of debt? It makes sense to me, but many personal finance experts say that you’re better off focusing strictly on the numbers.

No matter what you say about the inefficiencies in his strategy, it works. I'd guess thousands of people have pulled themselves out of debt with the advice he's given in just this one book. In fact, the book itself shares dozens of stories of people who have gotten out of debt via the debt snowball.

Now, you might think that saving 3-6 months’ worth of expenses “just in case” is a bit extreme. While that might seem like a lot of money to have lying around, I’d be willing to bet you’d be glad you had it if you suddenly got laid off from your job.

Or if you wanted to take a sabbatical from work for a while. Dave Ramsey’s plug for the 3-6 month emergency fund is simply this: peace of mind.

Imagine the peace of mind you’d have if you could not work for six months and still be able to pay the bills. Nice.

Paying Off The Mortgage

This is another area where Ramsey gets flack. People say that if your mortgage interest rate is lower than what you can earn via investing your money, that all of your extra cash should go toward investing.

Ramsey disagrees. Again, he cites the “peace of mind” factor. And according to the storytellers in The Total Money Makeover who have followed his advice, the grass under your feet really does feel different when you own your house outright with no mortgage attached.

His belief is that after you kick it on the mortgage, you’ll have plenty of monthly cash you can sock away in retirement and non-retirement investing. And you’ve no longer got the mortgage payment or balance hanging over your head.

As with his debt payoff strategy, Ramsey’s idea about putting mortgage payoff ahead of investing doesn’t net as much profit as investing first–especially if you’ve got a low mortgage interest rate.

But his readers say it works. And they always seem really happy they took the route outlined in the Total Money Makeover.

Will The Total Money Makeover Work For You?

So, should you try the Total Money Makeover plan? I would recommend giving it a try. It’s worked for millions of other people, so why not you?

If you try it and it doesn’t fit your life no harm done. Just pick another plan. With billions of people on the planet, each with their own set of unique circumstances, to believe there is one right way is foolish.

In personal finance, there are multiple solutions to any single problem. If you think it's only about math, you're wrong.

Decide to Make a Change

Sometimes it just takes flipping a switch in your head.

Maybe you put this idea into action by cutting up your credit cards or freezing it in a block of ice. Whatever that looks like to you, make a big deal of it. Sit down with your partner or significant other and decide you want to make a change. This is one of the most powerful ideas Dave Ramsey teaches.

He says that if you’re not psychologically ready to change your money situation, neither his plan nor any other plan will work.

Dave Ramsey first started sharing his advice it was 2003. And if you look in his book, you'll see numbers that are out of date.

He assumes 12% returns in the stock market. Today, most people would say it is a bit too optimistic. When you go through the book, consider recalculating those projections using 7-9%.

Don't focus too much on the numbers though. Adjust them to 2020 figures and then get to work following the plan because it's the process and psychology that is important – not the exact numbers.

The book is routinely in the top ten in Amazon's Personal Finance category. So if you're struggling with debt, I think you might want to give this book a try. The book also contains a lot of motivational stories of people who probably were in more dire straits than you and were still able to pull themselves out.

One final recommendation, if you are in debt, borrow this book from the library and put that cash towards your smallest debt. 🙂

Merrill Edge Promotions – up to $750 Cash

If you're thinking about opening a Merrill Edge account, you can earn up to $750 cash when you transfer at least $5,000 of new assets to your account.

DIRECTV is one of the premier (and perhaps one of the oldest?) cable companies that now offers a streaming service in addition to their satellite service. If you're thinking about them, here are the best promotions we know about.

10 Things They Don’t Tell You About Home Ownership

Owning a home is both wonderful and extremely challenging. For many, we think that owning is the "right" choice but I wish I knew these ten things before I bought my first house.

Surprise: A Penny Doubled Every Day for 30 Days?

If a genie offered you $1 million or a penny that doubled every day for 30 days - which would you choose? What if they offered $2 million? Or $5?