NOTE: This post was originally published in 2017 and updated at the end of 2019, all pre-dating the pandemic, the stock market fall and rise, etc. The points are still valid but the story around it will feel dated – just a heads up.

Ever wonder if the stock market is expensive or cheap?

If you rely on mainstream media to tell you, you're making a huge mistake.

Ever hear the line “if it bleeds, it leads?”

Just go back to articles from March of 2017) and read the “predictions” and see how they panned out. A Trump presidency was going to sink the market… but instead, it went on a tear. A HUGE tear.

(Incidentally, the Dow Jones Industrial Average is just an index of 30 companies and is a terrible index if you want to think about “the market”)

Kick the hype machine in the shins.

If you need one simple number to know whether the stock market is “overvalued” – I have it. It's what the pros use and if you give me a few minutes, I'll explain it to you so you will be better informed. It was a revelation to me when I learned it.

It's called the CAPE.

I'm going to go through the idea very quickly, then break it down using some numbers. Most of my knowledge on this is based on a great explanation by Mathieu Bouville, Ph.D., on his post here. I hope I can explain it more simply, though his explanation is great if you're willing to read it (and you should).

Jimmy is selling oranges today for $26 each. The news would have you believe that Jimmy is making a fortune! Look at the price! $26! Who pays that much for oranges?

That's because your biases look at the number ($26), look at the product (an orange), and think that $26 for an orange is absurd.

But if oranges have been selling for $36 for the last ten years, Jimmy's oranges are cheap! (or something's wrong with his oranges!)

If they were selling for $16 for the last ten years, then you'd be crazy to buy Jimmy's oranges. Unless you really really really needed an orange.

The only reason you believe it's expensive or cheap at $26 is that you have a general idea of how much an orange costs.

P/E is price to earnings ratio, or the price per share divided by the earnings per share each year. If Jimmy Oranges Inc. makes $5 a share and the stock market values each share of the company at $25, then the P/E is 5. If Jimmy Oranges Inc. is a sexy orange-y startup that makes no profit, then earnings are $0 and P/E is 0 (technically it's infinite… or not a number since you cannot divide by zero).

To get a historical look at prices, we use CAPE (cyclically-adjusted price-earnings ratio). Don't get bogged down by the cyclically-adjusted part, that just means we average it over an economic cycle so you're not making the mistake of looking at a boom or bust period.

With CAPE, we're talking about the CAPE of the S&P 500 (forget the DOW, that's junk) and a lookback period of 10 years.

That is an objective measure that you can't dispute. If you could historically buy earnings at 16.4x, then paying more makes it expensive. There's no judgment call here on whether it's a good or bad decision to pay more than 16.4x.

If you make regular contributions to your retirement and into an S&P 500 index fund, you're smart for doing it but you're just paying a little extra when the CAPE is over 16.4. It's better that you invest immediately than try to time the market and wait for the CAPE to dip (because it might now).

Scary huh? Hold onto your butts.

CAPE can remain high for a while 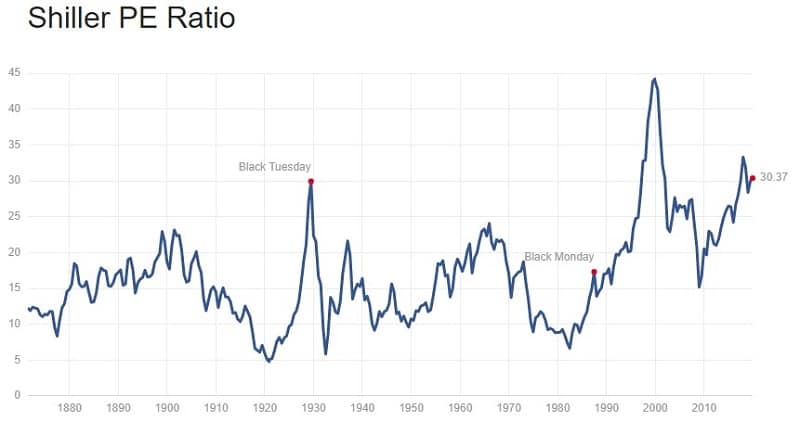 If you waited on the sidelines for the CAPE to go down before investing, you would've lost two and a half years. That said, if you put it in 100% bonds, you would've gone on a pretty crazy ride (for bonds): 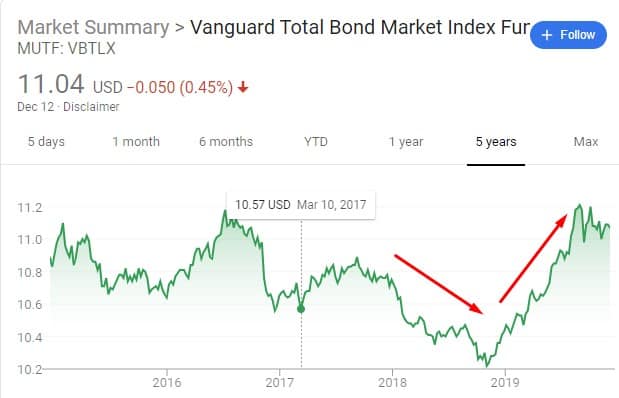 So CAPE can be informative but it's not everything.

The S&P500 is expensive. It's been expensive for quite some time.

Mathieu Bouville went back and looked at the performance of the stock market and found that the CAPE had some predictive power. He even suggests an investment strategy based on the CAPE.

The gist of that is that when the CAPE is below 11.6, hold 100% stocks. When it's above 19.7, hold 100% bonds. In between, it's a linear function. He suggestions that based on CAPE, you should be adjusting your stock to bond allocation – and he's probably right.

But there are non-zero costs for changing and based on your assets. (commissions, taxes)

So how can you use this without monitoring your allocation so often?

The best use of this is an idea I read on Can I Retire Yet? by Darrow Kirkpatrick. His post analyzes the best retirement withdrawal strategies (and his follow-up confirms it) suggests that when you need your retirement money and are picking which assets to sell, you can use CAPE to help. If CAPE says the S&P 500 is overvalued, sell those assets first. If it says the S&P 500 is undervalued, sell bond assets first.

The corollary to that is that if you're in accumulation mode (putting new money into the market), recognize that you cannot assume new money into the S&P will grow at the standard assumption of 7-10% per year. You may want to put it into bonds until the CAPE recovers, using a version of Bouville's strategy. Then adjust back to your target allocation when things are less frothy.

I don't mean to imply that you should time the market but you need to be reasonable in your assumptions given the state of the market.

I think that's the best use of the CAPE… besides impressing your nerdy friends at dinner parties when they're talking about the stock market.

There are many things to think about when you decide to switch employers, including what will happen to your 401(k). The good news is that your retirement savings don’t disappear like other employer-provided benefits, such as health insurance and paid leave. Here are 5 options for your 401(k) after you quit.

401K Withdrawal Rules: How to Withdraw from a 401K Without a Penalty

Too many Americans are withdrawing money from their retirement plans early. While retirement savings contributions are tax deductible, you may be subject to income tax and an additional penalty for withdrawing early. If you think you need to withdraw from your 401K, here are nine ways to do it penalty-free

FXIAX vs. VOO: Which Fund Should You Choose?

Investment funds that track the S&P 500 index make up the core holdings in many investment portfolios, and Fidelity's S&P 500 Index Fund (FAIAX) and Vanguard's S&P 500 ETF (VOO) are two of the most popular. Of the two, which fund should you choose for your portfolio? It's a close call.

How to Buy and Invest in Vacation Rentals

Owning a vacation rental can be a profitable way to make money from an investment property or a second home in a popular tourist destination. But there are several ways to invest, and each approach has its pros and cons. Here are several things to consider, along with the best platforms to buy vacation rentals.