Chick-fil-A is delicious. There's no way around it. That spicy chicken sandwich is divine.

Mmmm… so good. And the picture's only like an inch wide.[/caption]Heck, I just ate and looking at the picture of the dang thing is making my mouth water.

Want to know the best hacks for getting the most out of your next visit? I'll hook you up.

Swap the Kid's Meal Prize for a Cone 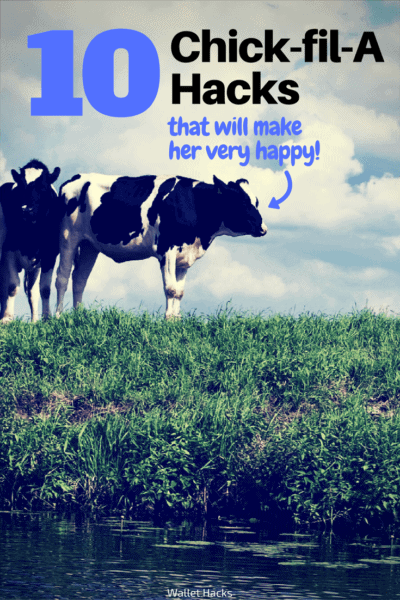 When you order a Kid's Meal, it comes with a toy or board book. If your kids prefer (and you prefer to let them have it), you can swap that toy for an Icedream cone or cup.

Chick-fil-A does a fun thing whenever they open a new franchise location.

It's called the First 100®. If you are one of the first one hundred people at a new Chick-fil-A opening, you can win Free Chick-fil-A food for a year. It's 52 coupons you can use to redeem a Chick-fil-A sandwich meal (sandwich, waffle fries and drink).

It's not technically the first hundred in line, they now do a lottery with a drawing period. This is to avoid craziness and something I fully support. There are also geographic restrictions, you have to live in one of the eligible zip codes near the restaurant (though the regions are fairly large). Check the rules.


(thanks to Erin Chase of $5 Dinners for these photos of an opening in Atlanta!)

As people wait, there are employees outside feeding folks and there's a drink machine too. It's not like camping overnight for a new video game or anything crazy like that… Chick-fil-A has done these enough that it even sounds like a pleasant experience!

Get the Chick-fil-A Cow Calendar

The calendar is available for a limited time each year but you get free stuff each month.

Six of those months are listed as mystery offers, to be listed that month, but the other six are worth way more than the price of the calendar (usually $7 + $4.99 shipping):

The calendar comes with a card that you bring to the restaurant to redeem your food.

Chick-fil-A pumps out a lot of food and sometimes it feels like your food is ready before you finish paying – because it is!

To get it the freshest as possible, make small modifications to your order like a sandwich without a pickle or your waffle fries extra crispy or well done.

Use The Chick-Fil-A One App!

The app is really good for ordering ahead because you don't even need to leave your car to pick it up. No waiting in the drive thru line either.

There are designated spots (there's a sign and the spot itself has lines across it) where an employee will hand deliver your order to you.

And if you're the type of person with a similar order each time (like our standard kids meal order), it'll remember that too so you won't have to go through a million menus to order the same things again.

Best of all – it's a rewards system too. You'll get treats based on your orders, free stuff is always good, and surprise awards throughout the year.

Get a Cow Outfit

On Cow Appreciation Day, Chick-fil-A will give you a free chicken sandwich if you show up with a cow outfit on. Technically, you get an entree and you just need to wear something “cowlike.”

Get a cow costume for Halloween once and get free chicken each year!

Chick-fil-A gets involved in the community very often. They frequently participate in community fundraisers, school programs, and other neighborhood events.

Last year, they partnered with our local library to support a summer reading program. Kids, after satisfying the reading requirements, could get a free Icedream cone.

If there is a community event near a Chick-fil-A, chances are Chick-fil-A will be involved somehow.

Just the other day, I ordered a bunch of stuff for curbside pickup from a Chick-fil-A that was newly renovated. Four kid's meals with 6-ct nuggets, fruit cup and chocolate milk.

I got four 4-ct nuggets, fries, and chocolate milk. By the time I realized it I was already putting the food down in front of our kids at a friend's house!

Fortunately, I had ordered a 12-ct for myself (actually a 12-ct) so the kids were fine. I was just annoyed.

So not a hack but a reminder — trust but verify.

Yeah, they got one… the best place to research that is on HackTheMenu.

They're Closed on Sunday!

This is easy to remember when you're at home but super hard to remember if you're traveling since everything will be off.

There have been many times when I'll be traveling and want to stop by Chick-fil-A on a Sunday morning for breakfast and realize it's closed. Boo! Now we just make sure to stay at a hotel with free breakfast in the morning so we have options just in case!

Make the Chick-fil-A Sandwich at Home

This is not technically a Chick-fil-A hack, because you're doing it at home, but one of my favorite food sites is Serious Eats. One of my favorite people on that site is J. Kenji Lopez-Alt (we own an Anova Sous Vide and Serious Eats has been my home for all this sous vide).

He took on replicating a Chick-fil-A sandwich at home and I can't wait to try it. He goes with Arnold Hamburger Rolls and Vlasic Ovals Hamburger Dill Chips and then launches into how to make the chicken itself. It's a good walkthrough.

Are Certificates of Deposit Worth it in 2022?

Are certificates of deposit still worth getting? We look at the current interest rates, alternatives, and help you decide whether they are worth it anymore.

Synchrony Bank is best known as the bank that powers many credit cards but they are also a bank - see what promotional offers they have available for folks looking to save.

Money ‘Rules of Thumb’ You Need To Forget Right Now

Many money rules of thumb are no longer correct and border on being dangerous if you follow them. See why I dislike most rules of thumb and specifically discuss six really bad rules.

How to Get Free Land in the United States

Given current housing prices across much of the U.S., you might think it’s nearly impossible to find affordable housing. However, if you’re flexible with where you can live, you may want to consider homesteading on free land. This guide helps show you how to get free land in the United States and start life’s next adventure.