We're planning a vacation to England and one of the things we'll need is cash.

In previous visits, we've relied on the partnership between Bank of America and Barclays. I could use a Barclays ATM to withdraw British Pounds without paying a fee while getting the most up to date currency conversion rate possible. More recently, Bank of America started including a 3% international transaction fee. That makes my previous strategy less appealing.

So what's the best way to exchange dollars into another currency, like the British pound?

All rates quoted were from March 30th, 2017 – use them as a way to compare relative rates. They are no longer current.

Use a no foreign transaction fee credit card 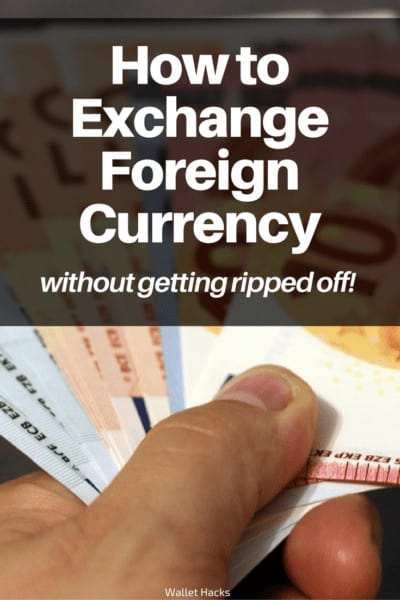 The most efficient way is to use a credit card that doesn't charge you a foreign transaction fee.

Visa and MasterCard are the most widely accepted. American Express works at major retailers but rarer at smaller merchant. No one has heard of Discover. 🙂

In my case, I'll be relying on the Chase Southwest Rapid Rewards Card, which is a Signature Visa card and has no foreign transaction fee. You can always check the rates that Visa uses for exchanges.

This is great! Except we're going to need cash sometimes.

Order it from your bank

How much of a premium will you pay? It depends on your bank and the currency.

Here's the pricing from Bank of America:

The exchange rate according to Google for each shown currency is:

It appears the premium is about 4-6% but Bank of America will even mail it to you.

Rates will vary, Wells Fargo will only charge you $1.3058 USD per GBP. Cheaper than bank of America, but slightly more than the going rate.

Use local atm with partnership

In my case, Bank of America has partnered with a lot of banks so you can withdraw money without the $5 ATM fee (though you still pay a 3% international transaction fee):

Check with your bank to see their list of partners in the country you're traveling to.

You get decent rates for it, plus convenience, but be very aware of any fees.

The worst possible way because the exchange rates are the worst. But if you find yourself in a jam and need a little cash, it's not completely unreasonable to turn to one of these.

Travelex is a popular airport currency exchanger. If your airport has international flights, chances are it'll have of these guys too.

When I checked online, their current rate was 1.367 USD per British pound. Far worse than any others on the list… but if you're in a jam, it's not horrible.

We will probably rely on a mixture of using a credit card and ATM withdrawals. Bank of America tacks on a 3% international fee but you get the current market interbank rate, which is better than the rate for shipping money to you.

One of the more challenging aspects of the holiday season is finding the perfect gift ideas for our family members, co-workers, and friends. It can be even harder if you're shopping on a budget. To aid you in your search, here is our list of the 50 best gifts you can buy for under $50.

Affirm has become one of the biggest players in the Buy Now, Pay Later loan space. While BNPL loans like Affirm serve a purpose, they are fraught with potential pitfalls. In this article, I explain how companies like Affirm work and whether or not BNPL loans, in general, are a smart choice.

How to Pay Rent With a Credit Card